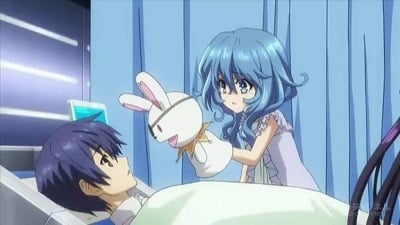 Date a Live Sub Indo – Kurumi and Kotori start fighting after a short conversation. Kurumi used one of her skills to make Kotori stay still, create copies of herself, and shoot Kotori a few times. Kotori fell over after Kurumi’s last shot but Kotori’s healing skill enables her to not die. Then, the shocked Kurumi sent her copies to kill Shido but he was pushed away by Kotori and the copies were killed. In the heat of the fight, Kurumi used one of her skills to inhibit Kotori but it only worked for a while. Kotori used her weapon to shoot Kurumi’s angel after the frightened Kurumi summoned her copies to shield her. Shido immediately stood in front of Kurumi to shield her, knowing Kotori is no longer herself when he tries to reason with Kotori to not kill Kurumi. After the shot launched, Kotori suddenly regained conscious and deflected the shot. Shido woke up on Fraxinus after dreaming of the event that happened 5 years ago. He went to meet Kotori for information of her powers after being calmed down by Reine. He left in despair to meet Mana and Origami in the hospital after he heard from Reine about Kotori’s condition. Being unable to meet Mana, Shido instead met Origami, who tried to get him closer to herself. Before Shido exited Origami’s room in the late evening, she told him of her intent to kill the Spirit of Fire to avenge her parent’s death five years ago and that’s the reason that she joined AST.