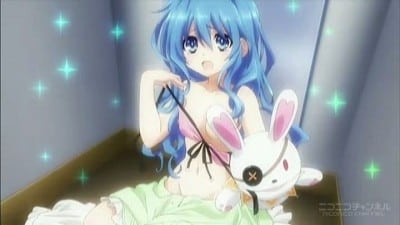 Date a Live Sub Indo – Shido is contemplating the situation regarding Kotori involving the events five years prior including the statements made by her and Origami about the apartment fire. While he meets with Reine to discuss the date with Kotori, Origami is informed about gear arriving at the base in two days by Ryouko while she visits. With Ratatoskr’s headquarters personnel all agreeing that Ocean Park is the ideal venue for Shido’s date, Shido undergoes training outlined by Reine involving Shido taking Tohka and Yoshino to buy swimsuits. As Tohka asks about a swimsuit, Origami appears and teases her that it’s a new piece of anti-Spirit equipment. Finally, she inquires of Tohka about the Spirit of Flames to the point of being overly polite in her questioning. Finding Tohka’s information useless, Origami pressures Shido into viewing her choices of swimsuits. Tohka and Origami turn it into a contest in that whoever turns on Shido more gets to go on a date with him. Yoshino ultimately wins but back on Fraxinus, Shido watches the video of the fire from five years ago. Recognizing ordinary video noise as a Spirit initiates a series of flashbacks that lead to Shido blacking out. Tohka and Yoshino tag along the next day to help Kotori ease up and be able to partake of the date. As Shido sees Kotori resorting to pharmaceuticals to counteract her deteriorating mental condition, his determination is invigorated leading him to take Kotori away alone. At the AST base, Origami gets a firsthand view of the DW-029 Annihilator Gear codenamed “White Licorice” sent there by DEM Industries for use by Mana. In talking with Ryouko, she’s indirectly told that they have footage of the battle between Kotori and Kurumi. In the last scene, Origami is staring at a frame from the footage showing Kotori as she realizes who Efreet is.