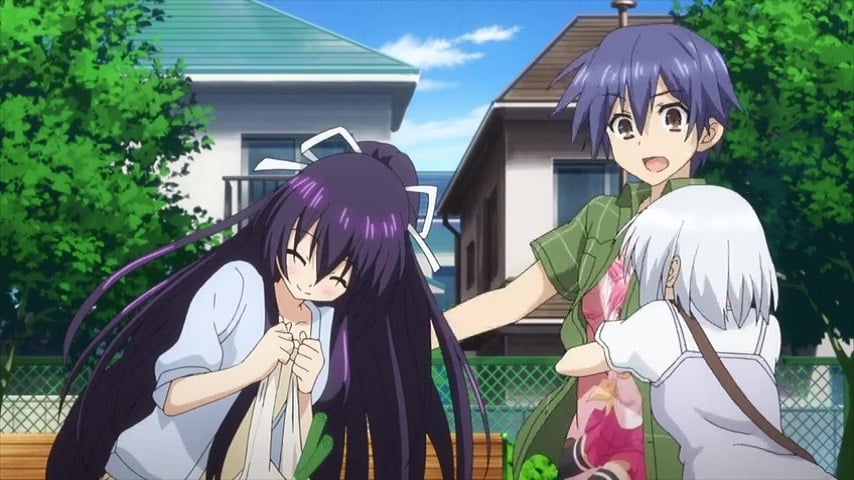 Date a Live Sub Indo – Picking up directly from Origami seeing Kotori, a frightened Kotori is with Shido at the amusement park riding various roller coasters and attractions on their date. Without communications, Ratatoskr can only monitor with Kyouhei making masochistic comments to the opportunities Shido should have taken. While separated, Yoshino tells Tohka what she overheard about Kotori being a Spirit and how Shido is trying to seal her powers. Origami steals the DW-029 Annihilator Gear codenamed “White Licorice” and suddenly attacks Kotori as she is talking to Shido. Origami enters into a rampage, going into a full offensive when she witnesses Kotori change into her Spirit form. Before Kotori strikes a finishing blow, Origami tells her of how she killed Origami’s parents five years ago sending Kotori into a state of temporary shock. Shido intervenes, delaying Origami but as she is about to fire Tohka and Yoshino arrive. Tohka strives to stop Origami but as her ordnance is exploding ever closer to Shido and Kotori, the latter two kiss effectively sealing Efreet. During the kiss, Shido and Kotori remember exactly what happened five years prior. Shido pleads with Origami as she reaches the operational limit of White Licorice and collapses from exhaustion. Kurumi is seen on a rooftop only commenting “This is not enough.” Back on Fraxinus, Reine reveals that the date wasn’t necessary as Kotori’s affection levels hadn’t wavered since Shido first woke. Kotori returns to fill out reports asking if what Shido said was true. Kotori gets uncharacteristically embarrassed as he confirms his love of her, but as Shido finishes saying simply as his sister he receives swift punishment. During the credits it’s shown that White Licorice has been returned and Origami has been hospitalized. As Shido is going to kiss Tohka he’s interrupted by Ratatoskr and finally Yoshinon along with Yoshino who simply say “To be continued. Sometime.”