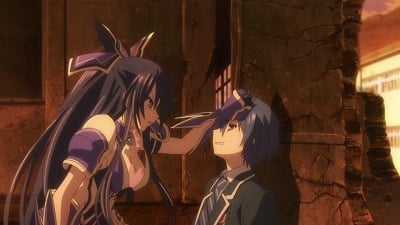 Date a Live Sub Indo – Shido is undergoing stage two of his training which is practical application upon real humans. First is his teacher Tamae Okamine who, with the assistance of Reine Murasame and Kotori, falls head over heels in obsessive love with him. Running away from her, he bumps into Origami Tobiichi. He uses her for practice but ends up unintentionally starting a relationship with her. A spacequake alarm occurs and the Princess Spirit is expected to appear at Raizen High School. With the students evacuated, Shido heads inside the demolished section of the school to confront the Princess. Shido makes a connection with the Princess and names her Tohka. The AST shows up and engages Tohka from long range with their rifles to kill Tohka but Origami sees Tohka with Shido and assumes that Tohka is holding him hostage. Since Shido is now her boyfriend, Origami snaps and flies to engage Tohka in close combat. Tohka is lost during an explosion and Origami is taken away for minor hospitalization. The next day, Tohka appears before Shido as he is rummaging through the rubble so that they may go on their date.