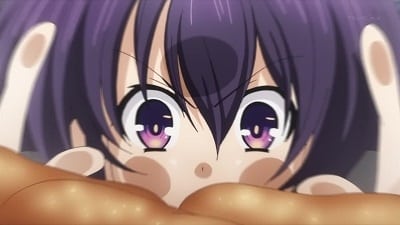 Sword That Splits the Sky

Date a Live Sub Indo – Shido and Tohka are on their date being overseen and supported by the Fraxinus crew. Tohka mistakingly assumes that each variety of food she is consuming at first is a “date”. Not accustomed to a crowd, when the couple enter the shopping area she assumes that humanity is launching an all out attack on her. Origami observes them from the shadows while Shido and Tohka go from a high-priced restaurant to south of the station where they enter an improvised shopping area. Tohka is able to indulge in the foods present to her desire but notices that Shido doesn’t seem to be having fun. They move on to an arcade that is dominated by crane games which Tohka mistakingly assumes is the “mecha team’s” secret base. In the course of playing for a prize that has caught Tohka’s eye, Tohka inadvertently voices her bond with Shido. They make their way to a cliff edge where Tohka finally finds out what a “date” is and sees why the “mecha people” want to kill her as she keeps destroying a world that is so kind, fun and beautiful. Meanwhile, Origami is given permission to fire only for Shido to push Tohka out of the way and get killed in her place. Tohka furiously attacks a stunned Origami as she sees the AST as killers and should die. Before Tohka can kill Origami, Shido is revived with his wounds completely healed and falls from the sky towards Tohka. To prevent the city’s destruction by a critical state Halvanhelev, Tohka kisses Shido while they glide down to the cliff edge as Tohka’s Astral Dress disappears. Her last request is that Shido take her on a date again.