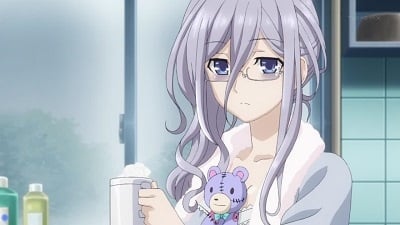 Date a Live Sub Indo – Shido meets Yoshino for the first time while running through a shrine on a rainy, ill-forecasted day. Believing her to be just a girl, he goes on about his way. At school, Tohka has made cookies and competes with Origami for Shido’s attention. Arriving home, Shido learns that Tohka will be living in his house since he has sealed her powers. Kotori explains that it is also training as Shido still has to assist in sealing more spirits. Later, as a spacequake alarm goes off during school, Shido heads out to find it is Yoshino that is the cause. Tohka is left in the shelter while Shido goes out to meet Yoshino only to have Tohka follow him and witness the two accidentally having kissed. Tohka retrieves her powers from Shido but only to provoke Yoshino who attacks while leaving. Utilizing her angel Zadkiel, Yoshino is also able to escape from the AST nearby while Origami eyes Yoshinon, Yoshino’s puppet.