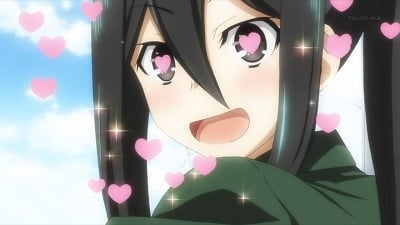 Date a Live Sub Indo – Tohka and Yoshino desire to visit a hot springs so Shido makes the arrangements with Kotori for them to go to Tenguu Gokuraku Hot Springs. Kyouhei attempts to convince Kotori to go but it’s revealed that he has ulterior motives. His punishment is to dig a hole and refill it for the next week. Meanwhile, Kusakabe is informed that the DEM Corporation is going to send reinforcements. Kusakabe also finds out that due to the increase in the Spirit’s attacks the alert level has been raised causing the group’s vacation trip to be cancelled. Convinced by an AST member, Kusakabe decides that the AST will instead go to the hot springs. Origami receives a phone call from Shido where she overhears that he’ll be going to the Tenguu Gokuraku Hot Springs with Tohka. While riding, Yoshino is given affectionate attention by Shido which frustrates Tohka causing her to collapse the road. This in turn disrupts the train the AST is riding on underground. The AST arrive at the surface behind Reine, Shido, Yoshino and Tohka. To prevent contact of the two groups, Ratatoskr intervenes in the path of the AST with multiple obstructions. Shido invites Kotori after seeing her but is interrupted while Kotori is informed of the situation regarding the AST. Kotori orders Date Town to enter Battle Mode Level 2 with authorization to open fire on the AST leading to a battle in which stray ordnance causes [Yoshinon] to fly off. Shido goes to find [Yoshinon] in the midst of the firefight and is almost killed by Ratatoskr’s Destruct Mode. Tohka saves Shido from the attack while being overseen by Origami and fellow AST members. Everyone reaches the hot springs but due to Yoshino’s actions, it has partially frozen. Kannazuki finds a hot springs that Kotori, Shido, Tohka and Yoshino end up enjoying by themselves. Mana Takamiya is then shown as arriving in Japan.