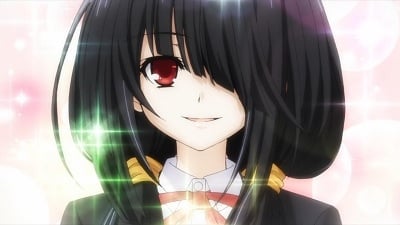 Date a Live Sub Indo – Mana is having a 10v1 practice match against Origami’s unit before having introduced herself at the briefing AST’s previous battle with Hermit where she unknowingly reveals herself to be Shido’s sister. Kurumi Tokisaki transfers into Shido’s class revealing herself to be a Spirit to get closer with Shido. During her time touring the school with Shido they’re followed by Origami and Tohka, but as Shido is attempting to seduce Kurumi she is also attempting to do the same to Shido. After school, Kurumi kills three humans and is confronted by Mana. Mana then runs into Shido later on that day. Taking her to his house, what Mana shares about herself leads to a quarrel between her and Kotori but ultimately leaves everyone with more questions than answers. During school the next day, Shido finds out that Kurumi was killed during her confrontation with Mana yet she appeared at school. Origami questions Kurumi in a secluded place and finds out that Kurumi is pursuing Shido.