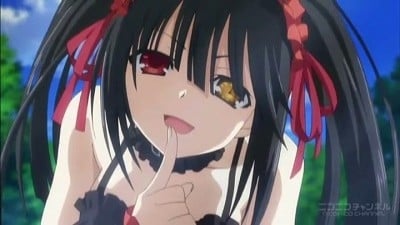 Date a Live Sub Indo – Shido invites Kurumi out but is forced on a polygamous date when Tohka seduces him and Origami forces her plans upon him for a date. Shido is unable to deny any of them as Tohka would be heartbroken, Origami would be suspicious and his plans to seal Kurumi depend on the date. With their dates occurring around the same time and their entertainment venues located rather close to each other, Ratatoskr assists Shido by teleporting him to each girl’s location while monitoring their emotional levels. After Shido leaves Kurumi, she finds some boys shooting at a stray cat and convinces them to let her play with them. Ratatoskr loses sight of Kurumi as Origami and Tohka run into each other. After they both proclaim their trying to find Shido for their date, Origami runs off concerned there may be another. Shido returns to look for Kurumi but finds blood, body parts, and Kurumi killing a man. As she holds Shido within her clutches, Mana intervenes wearing her CR Unit