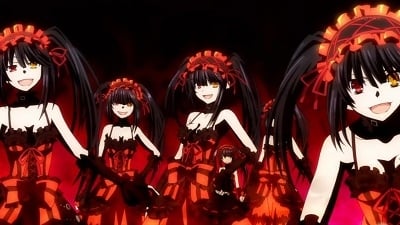 Date a Live Sub Indo – Mana kills Kurumi and explains everything to Shido. After he is forced away, he avoids Origami and Tohka after running into them because of seeing the death Kurumi caused. Tohka finds out the reason for Shido’s behavior and continues her date with him to try to cheer him up. After gaining some insight to Kurumi, the next day Shido declares to Kurumi that he’ll save her. Kurumi goes to the school rooftop while encasing the school in her field to dissuade Shido from trying to save her. Mana is confronting Kotori about Ratatoskr and attempting to use it as leverage against Kotori so she’ll release Shido from the potential danger he’s in. While Kurumi is threatening the school and the town, Origami and Tohka are engaging in battles with other copies of Kurumi. Shido convinces Kurumi only for her to be killed by another Kurumi. As Tohka and Origami show up, it’s revealed that the hands in Kurumi’s shadow are actually the hands of other copies of herself. Kurumi takes everyone hostage and attempts to blow a spacequake only for it to be blown away. Kotori appears explaining the cancelling of the spacequake while in her Spirit form. She has taken back her Spirit powers from Shido temporarily to fight Kurumi.