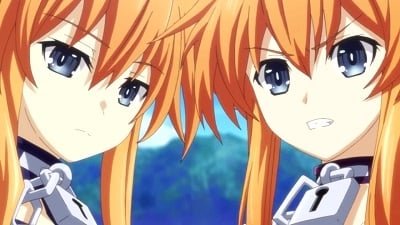 Children of the Storm

Date a Live Sub Indo – After a very awkward moment in Shido’s class where Tohka tries switching genders in an effort to bunk with Shido, the class goes on a field trip to Arubi Island. During the entire trip, Origami and Tohka end up constantly annoying Shido in an effort to win his affections. Meanwhile DEM Industries, an organization with an interest in spirits begins stalking Tohka. Some time later, a massive hurricane appears out of nowhere while Shido and Tohka are on a stroll. Three trash cans strike Tohka, knocking her out in the process while two spirits viciously battle overhead. When Shido tries to intervene, the twin spirits Yuzuru and Kaguya decide that their next battle will be over winning Shido’s heart to the latter’s dismay. When the two girls follow Shido back to the class holding his arms, Origami becomes enraged over her new competition. As Shido’s teacher tries to arrange the girls to be students in the class, Kaguya and Yuzuru explain that they were once one spirit named Yamai and that their contests are in an effort to find out whose personality will stay when the girls fuse and become Yamai once more. Later that day, an incident occurs when the twins drag Shido into the men’s bath in an effort to sexually seduce him. Things get worse when Tohka shows up along with the rest of the class.