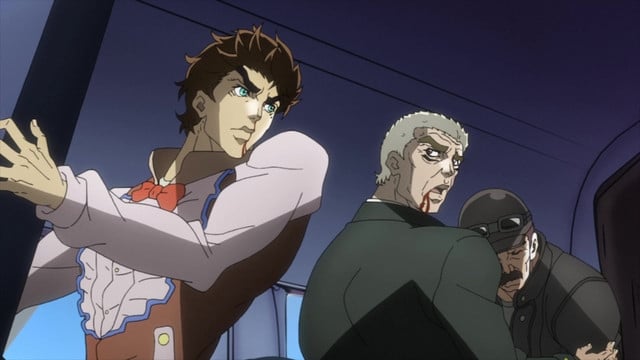 JoJo's Bizarre Adventure Sub Indo – In 1938, 49 years after Jonathan Joestar’s death, Speedwagon and Straizo travel to Mexico, where they discover an underground room filled with similar looking masks and a petrified body believed to be the being who created them. Meanwhile, in New York, Jonathan’s grandson, Joseph Joestar (also nicknamed “JoJo”), saves a young pickpocket named Smokey Brown from some corrupt policemen using the Ripple. Smokey is then taken in by Erina. Back in Mexico, Speedwagon is betrayed by Straizo, who uses one of the masks to become a vampire. After dealing with a mafia henchman at a restaurant, Joseph, Erina, and Smokey meet a mafia acquaintance of Speedwagon’s who informs them that Speedwagon has been murdered by Straizo, with Erina deducing to have something to do with the mask. Later, Joseph is confronted by Straizo, making the first move with an over-the-top Tommy Gun attack.