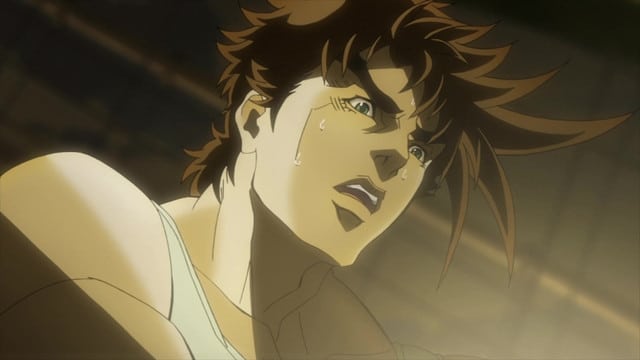 JoJo's Bizarre Adventure Sub Indo – As expected, Straizo recovers from Joseph’s attack and uses the laser eye attack Dio used to seemingly pierce through JoJo’s head and neck. However, this turns out to be a clever trick by Joseph, who manages to attack Straizo with the Ripple. Straizo manages to block it using a scarf woven from beetle muscles, but Joseph manages to sneak some grenades onto his person. Despite being blown apart, Straizo manages to pull himself back together, forcing Joseph and Smokey to retreat to a bridge. As Straizo catches up with them, he takes a woman hostage in order to goad Joseph into facing him. Straizo once again attacks Joseph with his laser, but Joseph manages to reflect it back at him before striking him with the Ripple. As Joseph tries to get information out of him, Straizo warns Joseph about a ‘Pillar Man’ who will soon awaken before killing himself with his own Ripple. Meanwhile, it is revealed that Speedwagon is alive but he is being held captive in Mexico, where a German military general named Rudol von Stroheim interrogates him about the Pillar Man, which they have excavated from the cave and intend to revive. Meanwhile, Joseph also makes his way to Mexico, unaware that he is being followed by a strange assassin.