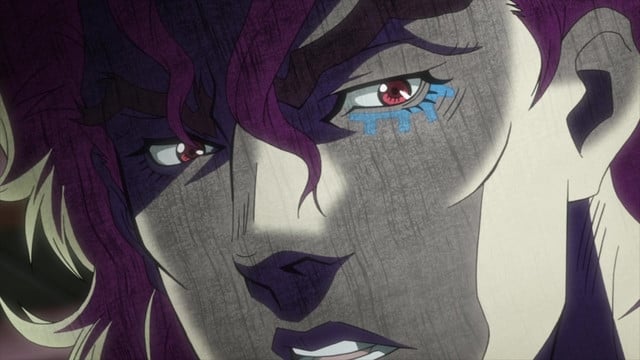 JoJo vs. The Ultimate Lifeform

JoJo's Bizarre Adventure Sub Indo – As JoJo begins to fight Santana, JoJo finds his Ripple to not be effective against him, but it still helps protect him from the Pillar Man’s attacks. JoJo appears to be knocked unconscious after receiving a powerful hit, allowing Santana to absorb him. However, this is all part of JoJo’s plan so he can use the Ripple inside of Santana’s body, ripping him in half. Chaining his upper body, JoJo attempts to drag Santana into the sunlight in order to kill him, but Santana’s absorbing flesh keeps him from reaching the top of the stairs. Stroheim steps in to try and open the door himself, but Sanatana ensnares his leg, as well. Stroheim gets JoJo to chop off his ensnared leg, allowing him to open the door and expose Santana to the sunlight. However, Santana avoids death by diving into Stroheim’s body by means of the now open wound from his leg. Resolving to take both himself and Santana out, Stroheim informs JoJo of the other Pillar Men his forces have found in Europe, telling him to go to Rome to learn how to defeat them before using a grenade on himself to once again expose Santana to sunlight by destroying his own body. As Santana makes a last ditch attack at JoJo, driving both into a well, JoJo manages to defeat Santana by using the noon sunlight reflected in the well’s water, turning Santana to stone.