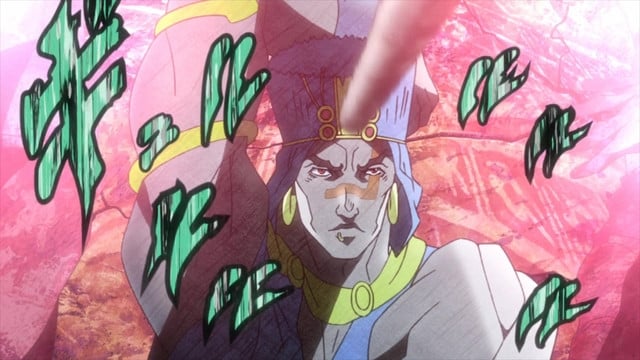 Ultimate Warriors From the Ancient Past

JoJo's Bizarre Adventure Sub Indo – Speedwagon brings statued remains of Santana to the headquarters of his foundation in Washington, D.C., where it is shown he is still alive, and has scientists keep his body under UV light. Realizing from Stroheim’s words that there are three more powerful Pillar Men somewhere in Europe, Speedwagon takes Joseph to Rome to meet Zeppeli’s grandson, Caesar, who is also skilled in using the Ripple. As Caesar questions Joseph’s abilities, he fights against him using his own Ripple abilities formed from clothes filled with soapy water, encasing Joseph in a bubble, but Joseph manages to break free using a sneak attack. As Caesar makes plans for Joseph and Speedwagon to be taken to see where the Pillar Men are being kept, one of the Pillar Men, Wamuu, breaks free, killing a group of German soldiers and awakening his masters, Kars and Esidisi, a Pillar Man destroys half of Caesar’s friend Mark’s body simply by bumping into him as he is walking past. As Caesar is forced to use his Ripple to peacefully end Mark’s suffering, he vows vengeance against the Pillar Men.