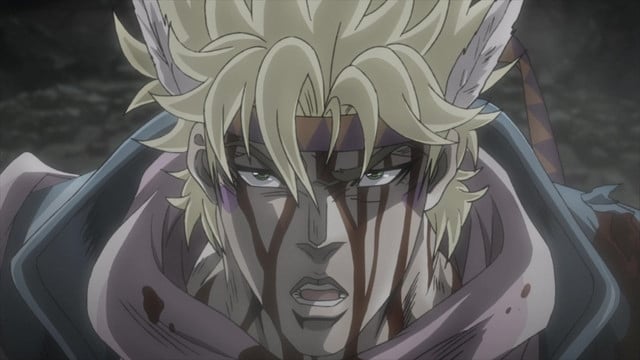 JoJo's Bizarre Adventure Sub Indo – Lisa Lisa tells JoJo of Caesar’s childhood, in which he took to crime at a young age after being abandoned by his debt-ridden father, Mario. However, when Caesar turned 16, Caesar came across the wall containing the Pillar Men, which was booby trapped by Kars. Mario saved Caesar from the trap, getting absorbed into the wall, but lived long enough to tell Caesar find Lisa Lisa and learn the Ripple. As Caesar arrives at the hotel, he is attacked by Wamuu, who is using streams of moist air to both protect him from the sunlight and reflect the light around him. Caesar launches an attack on Wamuu after he drags Messina into the hotel, but Wamuu manages to retreat inside the hotel, prompting Caesar to go in after him. Using a series of refractive bubble lenses, Caesar manages to redirect the sunlight inside the hotel to pin down Wamuu. However, Wamuu takes advantage of the split-second the sun is blotted by Caesar’s attack to deliver a critical counter attack. Too injured to continue for the fight, Caesar uses the last of his strength to steal the piercing containing the antidote for the ring around JoJo’s heart. He then uses his Final Ripple to create a blood bubble to deliver the piercing and his bandana to JoJo before being crushed by the collapsing ceiling. Wamuu, finding Caesar’s fight and loyalty to be admirable, allows the bubble to remain. JoJo and Lisa Lisa are attracted to the hotel after Messina does not return, and unknowingly see the light of Caesar’s Final Ripple. They discover the state of the hotel, finding the bubble with the antidote and Caesar’s scarf, and soon realize that Caesar has died, and weep over the loss of their friend and ally.