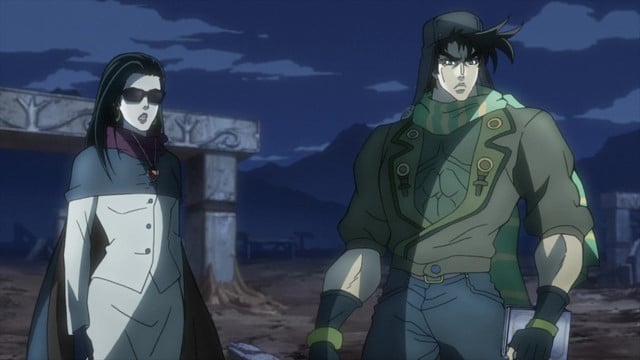 The Hundred vs. Two Strategy

JoJo's Bizarre Adventure Sub Indo – Whilst following Wamuu’s trail of blood, JoJo and Lisa Lisa encounter another vampire named Wired Beck, but Lisa Lisa manages to defeat him easily. As they press on, JoJo states he will not take the antidote he received until he has beaten Wamuu as a promise to Caesar. They soon arrive before Wamuu, where Kars is also waiting for them, along with a hundred vampire minions. Lisa Lisa manages to hold off their attack with a bluff saying that if both she and JoJo are killed, a time bomb will destroy the stone. Thus, she proposes that JoJo fights against Wamuu whilst she fights against Kars with the stone on the line. Wamuu and Kars arrange a place for the battle at midnight, keeping Lisa Lisa as insurance to make sure JoJo brings the stone. Whilst retrieving the stone, JoJo finds a picture of Erina from fifty years ago, becoming curious as to why Lisa Lisa would have it. Upon meeting at the arena, Lisa Lisa reveals that she was the baby that Erina rescued from the ship that fateful day, further explaining how she was raised by Straizo, who was the one who taught her about the Ripple and gave her the stone. As JoJo and Wamuu’s battle is revealed to be a chariot race using vampire horses, JoJo puts on Caesar’s bandana and prepares to battle.