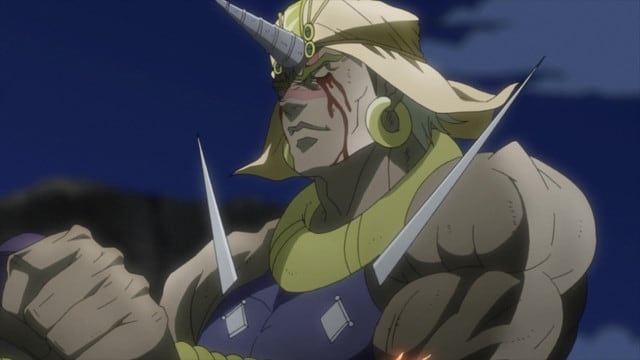 JoJo's Bizarre Adventure Sub Indo – Before the match begins, it is revealed that during each lap, there will be a different weapon for whoever can grab it from a pillar first. JoJo manages to get a headstart by obstructing Wamuu’s wheels with rubble, allowing him to get ahold of a sledgehammer. However, Wamuu grabs hold of the pillar itself, forcing JoJo to abandon his chariot, though JoJo manages to use the hammer to avoid getting trampled by Wamuu’s horses. Wamuu launches an attack on JoJo by hiding in his horse, but JoJo manages to use his cunning to turn his sandstorm attack against him with the Ripple. In order to regain his focus, Wamuu gouges out his own eyes and grows a horn that can sense the wind in its place. As the second lap offers a pair of crossbows, JoJo ends up picking one that is too big for him to use whilst Wamuu uses the wind to guide his shots with the smaller crossbow, managing to hit JoJo’s sides with a reflected shot. As he is thrown to the ground, he uses the momentum of the fall to cock his crossbow without the others noticing. JoJo appears cornered, but manages to hit Wamuu with a ripple-charged shot from his crossbow by distracting his senses with pebbles. Wamuu makes a desperate last attack by firing his severed arms at JoJo to cut off his breathing before gathering up wind for his final attack.