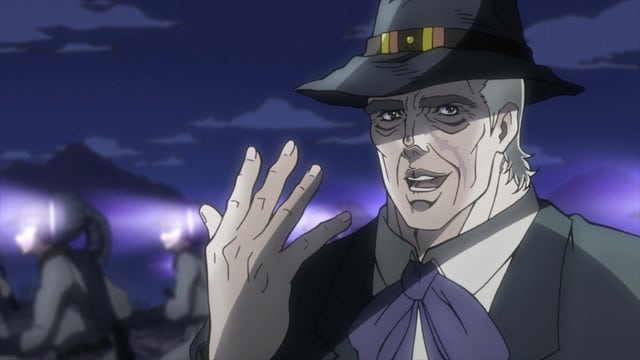 The Warrior Returning to the Wind

JoJo's Bizarre Adventure Sub Indo – Launching his Final Mode attack, Gathering Gale, which starts peeling away his own body, Wamuu begins firing a stream of wind capable of cutting stone towards JoJo. After a failed attempt at attacking him with a firebomb, JoJo strikes at Wamuu with Caesar’s flaming bandana, which Wamuu shreds with his wind. However, this is all parts of JoJo’s plan, as both the oil from the bomb and the burning embers of Caesar’s bandana are breathed in by Wamuu, causing him to explode from the inside. Deciding Wamuu’s wounds from the Ripple are fatal, JoJo gives him some of his blood to ease his passing as a sign of respect, similar to the respect Wamuu showed Caesar. When the other vampires suddenly attack, Wamuu uses the last of his strength to kill them, not wanting them to interfere until the end. Upon Wamuu’s request, JoJo drinks the antidote from his ring, allowing Wamuu to pass away with no regrets. It is soon time for Lisa Lisa’s battle with Kars, with Lisa Lisa apparently getting the upper hand with her Ripple-infused scarf. However, Kars cheats by using a body double before stabbing Lisa Lisa from behind, showing no respect for the honor of battle unlike his compatriate Wamuu. After claiming the Red Stone of Aja for himself, Kars sends his vampire army after the weakened JoJo. However, he is rescued by Stroheim and his men, along with Speedwagon and Smokey, who use ultra-violet lights to fight off the vampires whilst JoJo goes to face Kars. As Kars uses Lisa Lisa to force JoJo into a vulnerable position, Smokey reveals that Lisa Lisa is in fact JoJo’s mother.