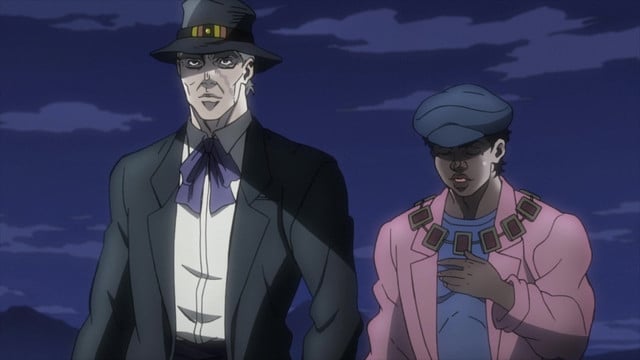 The Link to JoJo

JoJo's Bizarre Adventure Sub Indo – Being forced to cling onto a rope to stop Lisa Lisa from falling to her death, JoJo is at a huge disadvantage against Kars. Feeling he has a plan, JoJo sets his scarf on fire, stating he will finish Kars off before it fully burns. Kars then cuts the rope in the hope of sending both JoJo and Lisa Lisa to their deaths, but falls into a snare laid out by JoJo, allowing JoJo to hit him with a Ripple attack and knock him down into the sharp crystals below. As JoJo rescues Lisa Lisa, Speedwagon explains to Smokey how Lisa Lisa, her real name being Elisabeth, was brought up by Straizo who taught her the ways of the Ripple. She later met and was courted by Jonathan and Erina’s son George Joestar II, with their marriage resulting in the birth of their child Joseph. George II ultimately joined the Royal Air Force, battling in the Great War as an ace fighter pilot. However, a zombie who had survived the death of Dio and the destruction of the first Stone Mask soon sought vengeance for Dio’s death, staying alive by eating people whole, not even leaving bones behind. He ultimately disguised himself as a high-ranking RAF officer and arranged a meeting with George II, who discovered the trap too late. George II may have had some latent talent for the Ripple like his father and son, but he had no training and was easily killed by the zombie. When Elisabeth discovered the treachery, she hunted down the zombie and easily killed him with her Ripple powers, but she was caught in the act by an RAF official who thought she murdered a human in cold blood and burned the body to hide the evidence. Wanted throughout all of Europe, Elisabeth became a fugitive until she met with Speedwagon once more, using his foundation’s resources erase all trace of her past, and placing her on Venice’s Saplena Island where she changed her name to Lisa Lisa. Upon learning of the events, Erina began raising Joseph on her own, and asked Speedwagon to make sure that the young JoJo never learned the truth of the events that had unfolded so he may never learn the Ripple and have such a terrible fate befall him as had happened to the rest of her family. With Speedwagon’s story over, Stroheim attempts to finish off Kars with multiple blasts of ultraviolet beam, but Kars suddenly puts on the Stone Mask with the Red Stone of Aja in place. Before Stroheim can call off the attack, the artificial sunlight from all the German soldiers and Speedwagon Foundation operatives channels through the Super Aja, activating the Stone Mask and sending its undiluted energy into Kars, who undergoes a dramatic transformation.