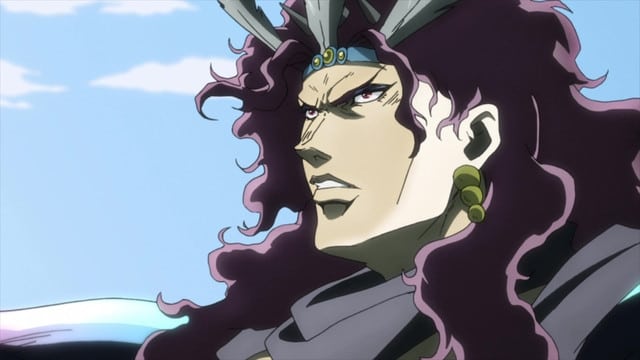 Birth of the Ultimate Being!

JoJo's Bizarre Adventure Sub Indo – Kars demonstrates his new powers, turning his hand into a flesh-eating squirrel that deals damage to Stroheim. The sun rises, killing the rest of the vampire minions, but Kars remains standing, immune thanks to the power of the stone. JoJo grabs the stone and runs off with Smokey to lure Kars away from the others whilst thinking of a plan. Leaving Smokey behind before he can tell him about Lisa Lisa, JoJo boards a plane to lure Kars away further. JoJo theorises he may be able to beat Kars if he drops him into a volcano and heads towards a volcanic island. As Speedwagon attempts to stop JoJo by telling him about Lisa Lisa, the feathers that Kars had launched on JoJo’s plane turn into pirahnas which cause the plane to start crashing. JoJo uses his parachute to lure Kars into the path of the plane as it heads towards the volcano’s crater. Kars attempts to escape but Stroheim arrives to stop him, rescuing JoJo from the plane before it crashes into the lava, which starts melting Kars. JoJo and Stroheim believe they have finally won, as Kars is now being defeated by the very Earth that birthed him.