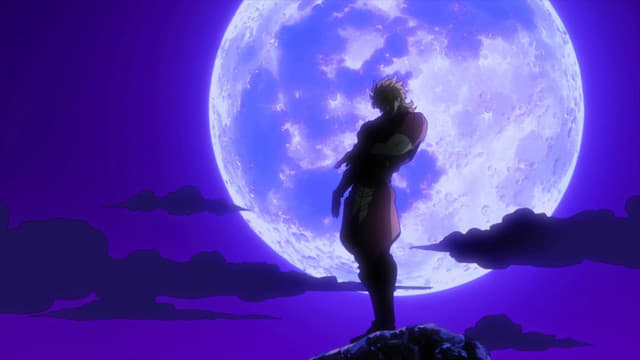 JoJo's Bizarre Adventure Sub Indo – Upon arriving in Windknights Lot, JoJo’s group is pickpocketed by a talented young boy named Poco who JoJo and Zeppeli manage to catch using their ripple powers. However, as the sun falls, they find themselves confronted by Dio, who had hypnotised Poco to lure JoJo’s group to the graveyard where they are attacked by his legion of zombies. Zeppeli attempts to use his ripple attacks on Dio, but he counters by freezing his veins. After also managing to freeze JoJo’s hand, Dio summons two powerful zombie knights, Tarkus and Bruford, to finish the job for him. As JoJo struggles against them, Speedwagon uses his body heat to thaw Zeppeli’s arm. As JoJo is forced by Bruford, he manages to use an air pocket from under a rock to utilise his ripple energy and launches an Overdrive attack at him.