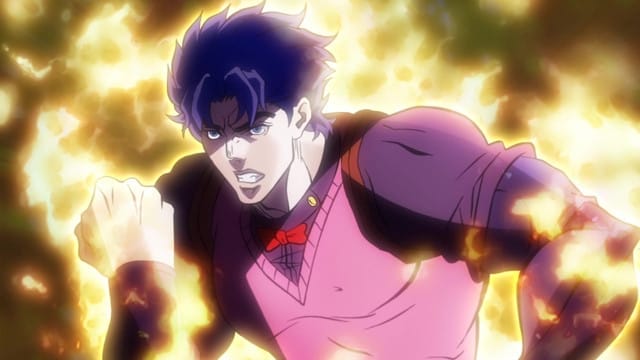 JoJo's Bizarre Adventure Sub Indo – As Bruford manages to barely avoid JoJo’s attack, JoJo is once again ensnared by his hair. However, JoJo manages to block Bruford’s attack and channel an Overdrive attack through his sword, disintegrating one of his arms, before unleashing a barrage against him. As Bruford’s body starts to disintegrate, he regains his human soul, feeling at peace and leaving JoJo his sword before completely disintegrating. Tarkus then attacks, but JoJo and Zeppeli manage to get Speedwagon and Poco to safety using a bunch of leaves as a hangglider. As they make their escape, Zeppeli recalls how he learned to control the Ripple from a man named Tonpetty. As Tarkus leaps after them, they touch down at a knight’s training ground in order to stand against him. JoJo is pulled inside the grounds by Tarkus, thrusting him into a Chain Neck Deathmatch, in which one must decapitate the other in order to free himself. Realizing JoJo will be killed if no one does anything, Poco overcomes his nerves and enters the grounds via a window, managing to unlock the door so Zeppeli can get inside.