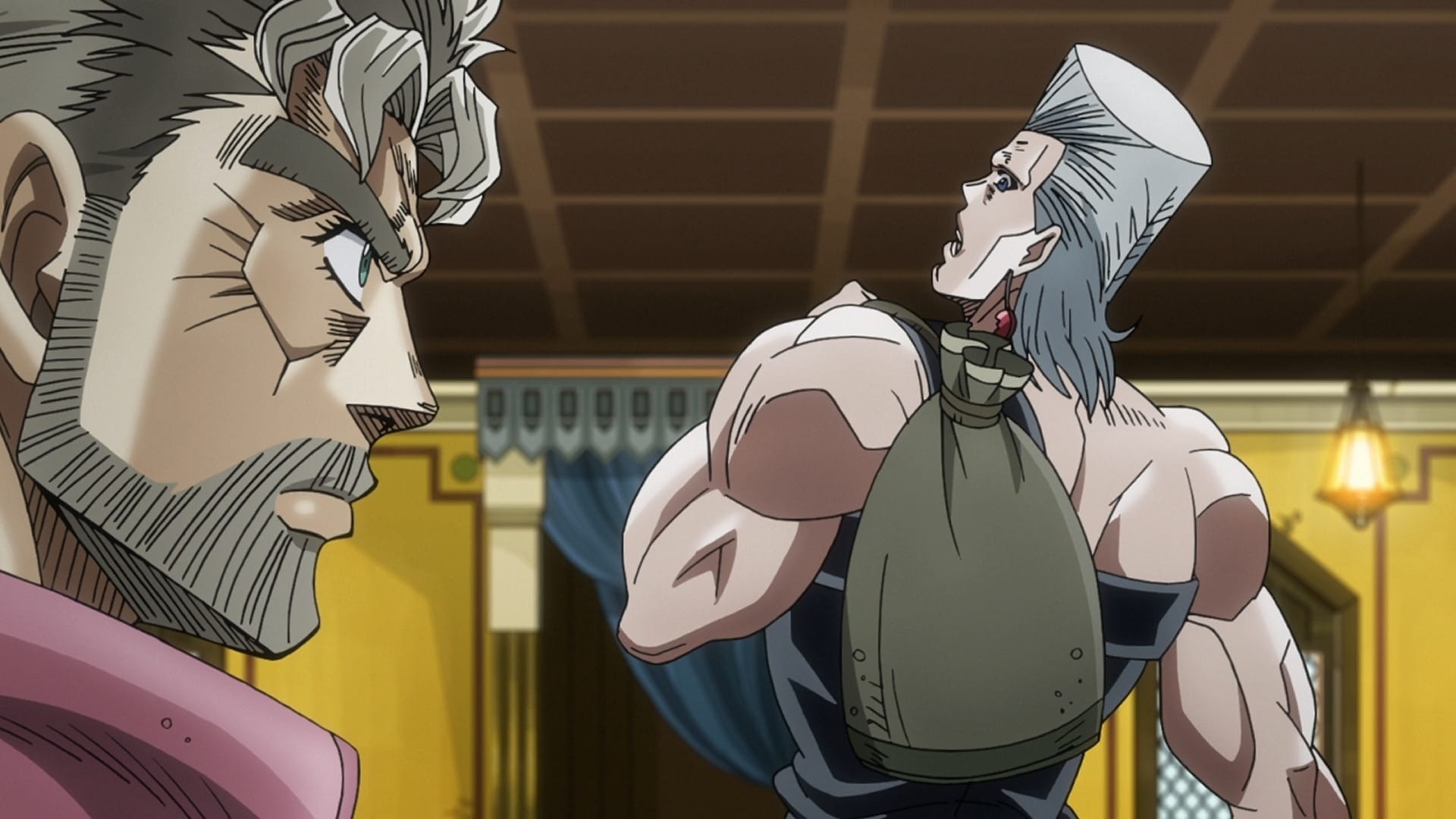 The Emperor and the Hanged Man, Part 1

JoJo's Bizarre Adventure Sub Indo – The Joestar group arrives in Calcutta, India, and after an encounter with the local beggars the group stops at a nearby restaurant to relax. After having an unfortunate meeting with a pig in the restaurant’s toilet, Polnareff sees a Stand in the mirror, and realizes that it must be J. Geil’s Stand the Hanged Man. He smashes the mirror before the Stand gets too close, and afterwards decides he should hunt down his sister’s killer on his own, despite Avdol’s warnings that they should remain together. Elsewhere, Hol Horse, another of Dio’s assassins, bids farewell to a young woman who wishes to marry him, lying to her that they will see each other, again. He is off to meet J. Geil himself, and the two agree to kill Polnareff first, after J. Geil baited him so well, planning to use their Stands the Emperor and the Hanged Man in combination. The next day, as Joseph and Avdol worry that Polnareff has truly gone off on his own, Polnareff finds a local who has seen J. Geil, and points to the man nearby with Hol Horse. As the rainy sky clears, only Hol Horse remains, shocking both the old man and Polnareff. Hol Horse introduces himself and taunts Polnareff by saying, “The gun is mightier than the sword” (銃は剣よりも強し Jū wa ken yori mo tsuyoshi). Polnareff demands to know if he knows J. Geil, and Hol Horse says he came with him, before saying he will kill Polnareff, who doubts Hol Horse’s powers. The two taunt each other more, with Hol Horse revealing that his Emperor is the gun that is mightier than Silver Chariot’s sword. Hol Horse fires a round off with the Emperor, and Polnareff has Silver Chariot discard its armor to become faster, only for the bullet to change trajectory around Silver Chariot’s sword, revealing that it too is a part of the Emperor. Just as the bullet is about to strike its mark, Polnareff is saved in the nick of time by the arrival of Avdol, who realizes the bullet is arcing back. He summons Magician’s Red to stop the bullet, and while Joseph and Jotaro cannot find him, Kakyoin arrives on the scene just as the Hanged Man stabs Avdol from the reflection in a rain puddle behind him and the Emperor’s bullet strikes him in the forehead. Hol Horse is pleased, as they felt that Magician’s Red would have been too formidable an opponent for himself and J. Geil, and Kakyoin is in shock that Avdol has died so easily. Polnareff seems angry that Avdol interfered as he did, but Kakyoin soon realizes that Polnareff’s anger is only a front for his true feelings of sorrow towards their friend’s senseless death.