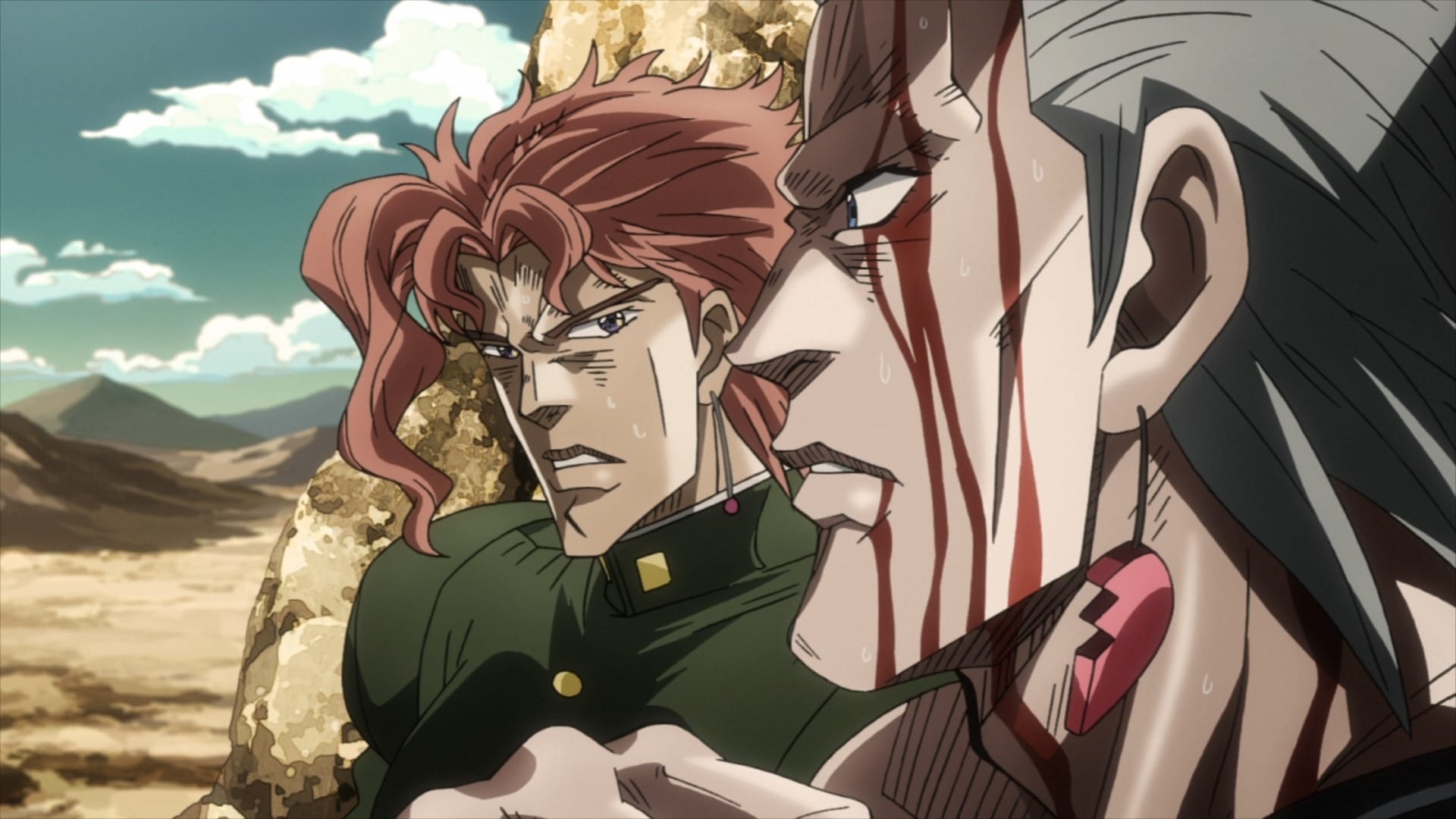 The Emperor and the Hanged Man, Part 2

JoJo's Bizarre Adventure Sub Indo – Kakyoin tries to convince Polnareff to retreat to safety until they can discover a way to beat the deadly pair, but J. Geil provokes Polnareff into attacking his Hanged Man within a glass window, using the broken shards of glass to pin him down. Just as Hol Horse fires a round off with the Emperor, Kakyoin uses Emerald Splash on Polnareff to get him out of the way, and escapes with him in a car, leaving behind Avdol whose body is eventually found by Jotaro and Joseph. During their escape, as Polnareff realizes the error of his ways following an elbow to the face from Kakyoin, Kakyoin theorizes that there is no such thing as a “mirror world” that the Hanged Man operates in as mirrors only reflect light. However, he is interrupted when they discover that the Hanged Man has followed them on the car’s various reflective surfaces, forcing them to crash the vehicle and retreat behind a nearby rock. The sudden battle leads the two to realize that the Hanged Man is actually a Stand of light that jumps between reflective surfaces. They are soon put in a dangerous situation when the Hanged Man jumps into the reflection of the eyes of a young boy, who is unable to look away from the pair out of curiosity. However, Polnareff overcomes this by kicking sand in the child’s eyes, forcing the Hanged Man towards his own eye and allowing Polnareff to strike it in its path, leading him and Kakyoin to J. Geil’s location and a man with wounds identical to the Hanged Man. However, this man is just a decoy, as the real J. Geil uses a nearby group of beggars to trap Polnareff and Kakyoin between them, using the Hanged Man to jump from eye to eye. Polnareff believes all is lost, but Kakyoin takes out a shiny gold coin and flips it into the air, bringing everyone’s gaze, along with the Hanged Man, towards it, allowing Polnareff to cut the Stand down before finally avenging his sister by killing J. Geil. Later, Hol Horse catches up to Polnareff and Kakyoin, but finds that the Emperor no longer has any advantage against them now that J. Geil is dead. As Hol Horse is pushed into a corner by Jotaro and Joseph, who say they have just finished giving Avdol a proper burial, Polnareff prepares to carry out his sentence but is stopped by Hol Horse’s lover, allowing Hol Horse to escape. After treating the woman’s wounds, Joseph urges the group to continue their journey towards Egypt, unaware that a drop of the woman’s blood has caused a mysterious growth to appear on his arm.