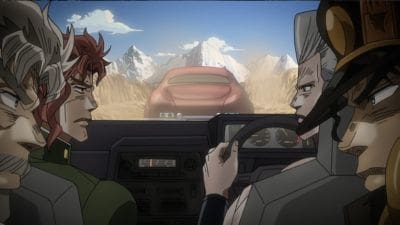 JoJo's Bizarre Adventure Sub Indo – On their way driving to Pakistan, the group finds Anne hitchhiking at the side of the road and they reluctantly take her along with them. Upon continuing their journey, a red car gets in their way and leads them into the path of an oncoming truck, with Jotaro quickly using Star Platinum to avoid a fatal collission. After stopping at a roadside tea house later on, the group, believing the owner of the red car to be a Stand user, spots the car parked nearby and they start pressing the other customers, only for the car to drive off. They chase after the car, following a signpost that the car had switched around in advance, and wind up at a dead end, where the car appears from behind them and pushes them off of a cliff. Kakyoin manages to stop their fall by having Hierophant Green hook a cable to the other car, before Jotaro uses Star Platinum to pull themselves to safety, knocking the other car down the cliff in the process. Just then, a voice comes from their own car’s radio, revealing the red car to actually be the Wheel of Fortune Stand, which emerges from the ground and destroys their vehicle, transforming into a stronger form. The Stand starts attacking Jotaro and the others with a seemingly unseen projectile, forcing the group to try and escape. Jotaro prepares to unleash an attack on Wheel of Fortune’s underside, only to learn that the purpose of the earlier attacks was to soak them in gasoline. Wheel of Fortune’s user, ZZ,[h], uses the sparks on his car to set Jotaro ablaze, seemingly killing him. However, Jotaro manages to avoid the flames by digging underneath the ground and uses Star Platinum to destroy Wheel of Fortune and send ZZ flying out into the open. After chaining ZZ to a rock, the group borrows the car, which had reverted to its original dilapidated form, and they continue their journey. Meanwhile, Enya, frustrated that all of her Stand wielders have been defeated, decides to confront them personally with her own Stand: Justice.