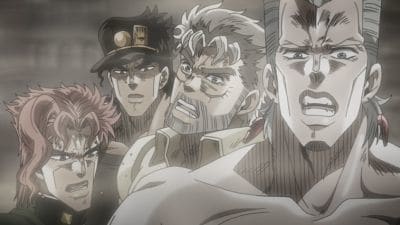 JoJo's Bizarre Adventure Sub Indo – After explaining Holly’s situation to her, Joseph manages to convince Anne to return back to her home in Hong Kong. With heavy fog making it dangerous to continue driving near the cliffs towards Karachi, the group stops by a nearby town to look for a hotel. After failing to get directions from a strangely silent restaurant owner, the group comes across a dead body lying on the street, uncertain of what has caused the man’s death. With no one else in the town seeming to acknowledge the corpse’s presence, the group becomes wary and suspects a Stand user is involved, with their suspicions growing when they discover the body is riddled with bloodless holes. Feeling they should leave the town, Joseph jumps towards what he believes to be their car, only to narrowly avoid being impaled by a spiked gate. It is then that Enya appears before the group, claiming to be an innocent old woman and she leads them to a nearby hotel. As the group checks into their rooms, Hol Horse shows up at the hotel, having tracked the Joestar group to their location. However, Enya, believing Hol Horse needs to die for abandoning J. Geil, attacks his wrist with some scissors before using Justice, her Stand which takes the form of the fog itself, to make a hole from his wound. Justice then uses the wound to control Hol Horse’s arm like a puppet and make him shoot himself with his own Emperor, allowing Enya to set her sights on her next target: Polnareff.