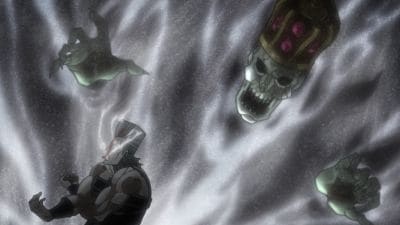 JoJo's Bizarre Adventure Sub Indo – Enya rushes to hide Hol Horse’s corpse from Polnareff to avoid alerting the others, struggling to surpress her rage when Polnareff shows his appreciation of her “hospitality”. However, Hol Horse, who is still alive, alerts Polnareff to an attack from Enya, who uses Justice’s fog to control the dead civilians of the village like zombies. Retreating to a bathroom to hide from the zombies, Polnareff is hit by a surprise attack from the bathroom door’s keyhole, allowing Justice to take control of his tongue. While making Polnareff lick the toilet in humiliation, Enya is approached by Jotaro, who has suspected something was amiss with her and sees through her ploy when she refers to him by his real name, as the group had all used fake names when signing the hotel ledger earlier. Enya manages to inflict a wound on Jotaro’s leg, but Jotaro manages to overcome Justice’s fog-like form by having Star Platinum inhale it, suffocating Enya until she passes out. With the village revealed to have been a cemetary the entire time, Jotaro suggests to the group that they take Enya with them to learn more about Dio, while Hol Horse makes off with their car, advising the group to kill Enya while they still can.