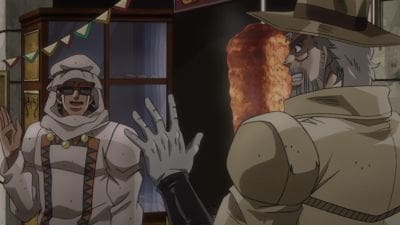 JoJo's Bizarre Adventure Sub Indo – As the group stop by a kebab shop in Karachi, the store owner turns out to be Steely Dan,[i] wielder of the Lovers Stand, who gloats as Enya is killed by some of Dio’s flesh buds that Steely Dan had implanted in her body to keep her from revealing the truth. She dies, still believing in Dio rather than telling Joseph the truth about Dio’s Stand. Jotaro has Star Platinum attack Steely Dan, only for Joseph to be simultaneously thrown back. Steely Dan reveals he has used his microscopic Stand the Lovers to enter Joseph’s ear, where it causes any pain inflicted on himself to be amplified and sent to Joseph, even paying a child to hit him with a stick to prove he is not lying. He also reveals the Lovers will begin implating a flesh bud which will kill Joseph in 10 minutes. Jotaro, though angry, restrains himself as he caters to Steely Dan’s whims to prevent him from hurting his grandfather. Meanwhile, Joseph, Kakyoin, and Polnareff seek out a television so Joseph can use Hermit Purple to make an image of the inside of his brain, allowing Kakyoin and Polnareff to shrink down their Stands to enter his body and locate the Lovers in order to save his life.