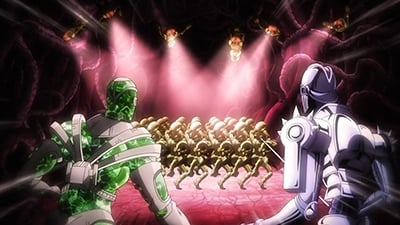 JoJo's Bizarre Adventure Sub Indo – As Jotaro continues to put up with Steely Dan’s whims, Kakyoin and Polnareff’s Stands arrive in Joseph’s brain where the Lovers and the flesh bud is. Although Polnareff acts first, he is hurt when the Lovers uses Joseph’s brain cells to disguise himself as Heirophant Green and make several dummies of itself, leaving them unable to determine which one is the real Stand. Elsewhere, Jotaro shines Steely Dan’s shoes, and takes a beating from him, all while taking note of everything he is doing for him so he can make Steely Dan pay later. He is enraged when he takes a beating because Steely Dan forced him to steal from a jewelery shop. In Joseph’s brain, Kakyoin manages to use Heirophant Green to find and attack the real Stand and force it out of Joseph’s body, giving Joseph the opportunity to destroy the flesh bud in his brain with the Hamon. Realizing he has been defeated, Steely Dan tries to divert Jotaro’s attention so the Lovers can enter him instead, but he is quickly spotted and caught by Star Platinum. In desperation, Steely Dan tries to have the Lovers enter a young girl’s ear, but it is stopped by Heirophant Green’s tentacle, which Kakyoin attached before it escaped. This stops Steely Dan’s movements completely, allowing Jotaro to finally get his revenge for all Steely Dan put him through.