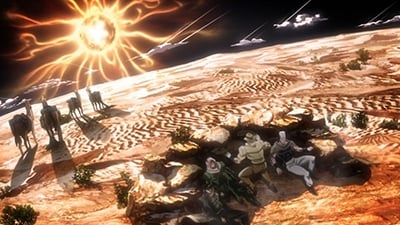 JoJo's Bizarre Adventure Sub Indo – Upon arriving in the United Arab Emirates, Joseph purchases an expensive car, which he later trades for a group of camels to ride through the Arabian Desert, despite having never ridden one before. After the group eventually manages to get on their way, Jotaro and Kakyoin feel like someone is watching them, but cannot find anyone suspicious. Once they realize that the sun is still in the sky, even at 8 o’clock in the evening, with the temperature rapidly increasing, the group realizes what they thought was the sun is actually the Stand the Sun. Kakyoin attempts to judge the distance of the Stand, but comes under attack from the Sun, which also ruins their water supply. All seems lost, particularly to Joseph when his companions all begin to laugh, which he worries is a heat stroke induced delirium, but Kakyoin clues him in on their discovery. He has found a rock in the middle of the desert identical to another, and when Jotaro throws a rock in its direction, a crack seemingly appears in the sky, and the Sun is defeated, restoring the night sky. The group goes over to the crack to find the Sun’s user, Arabia Fats, out cold, having been hiding behind a mirrored duck blind to keep the group from spotting him.