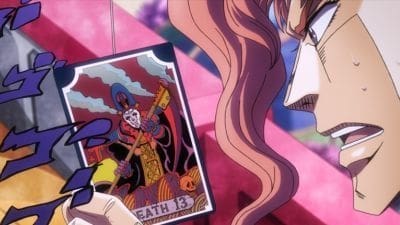 JoJo's Bizarre Adventure Sub Indo – Kakyoin has a dream where he is in a deserted amusement park, accompanied only by a dog. Suddenly, the Death tarot card appears, and he is attacked by its image, the Stand Death 13, killing the dog, before Polnareff wakes him up to tell him that they are on the way out of town. Kakyoin becomes concerned when he finds his hand has been cut in his sleep, and moreso when he spots the dog he saw in his dreams, killed in the same manner as he saw in the dream. When the two catch up with the others, Joseph is arguing with a man he had planned to rent a plane from, who has now refused to let him go as they need to get a baby to the hospital. Joseph offers to take the child with them, and a woman with the child agrees. As the group takes off, the woman says she must find the child’s mother, admitting that the child, Mannish Boy, is not her own, and she was scared of his fangs. While in flight, both Kakyoin and Polnareff fall asleep and find themselves at the amusement park, again. Kakyoin tries to warn Polnareff that he was attacked in his dreams by a Stand, using the dead dog as proof, but Polnareff does not seem to pay much attention, until Death 13 makes itself known once more, attacking the two of them. They find that in their dreams they cannot summon their Stands to fight back, but before Death 13 lands a mortal blow on Polnareff, Joseph wakes him up to have him change the baby’s diaper, leaving Kakyoin on his own. As Death 13 is revealed to be the Stand of Mannish Boy, Kakyoin cuts his own arm, as he thrashes about in his sleep, causing Joseph to crash the plane. As the team sets up camp to prepare for rescue, Kakyoin sees that he has cut the words “Baby Stand” into his arm, leading him to realize that the child they have been taking with them is their attacker. He tries to warn the others, but they do not believe him, as Mannish Boy is pleased that his plans to kill the group are succeeding.