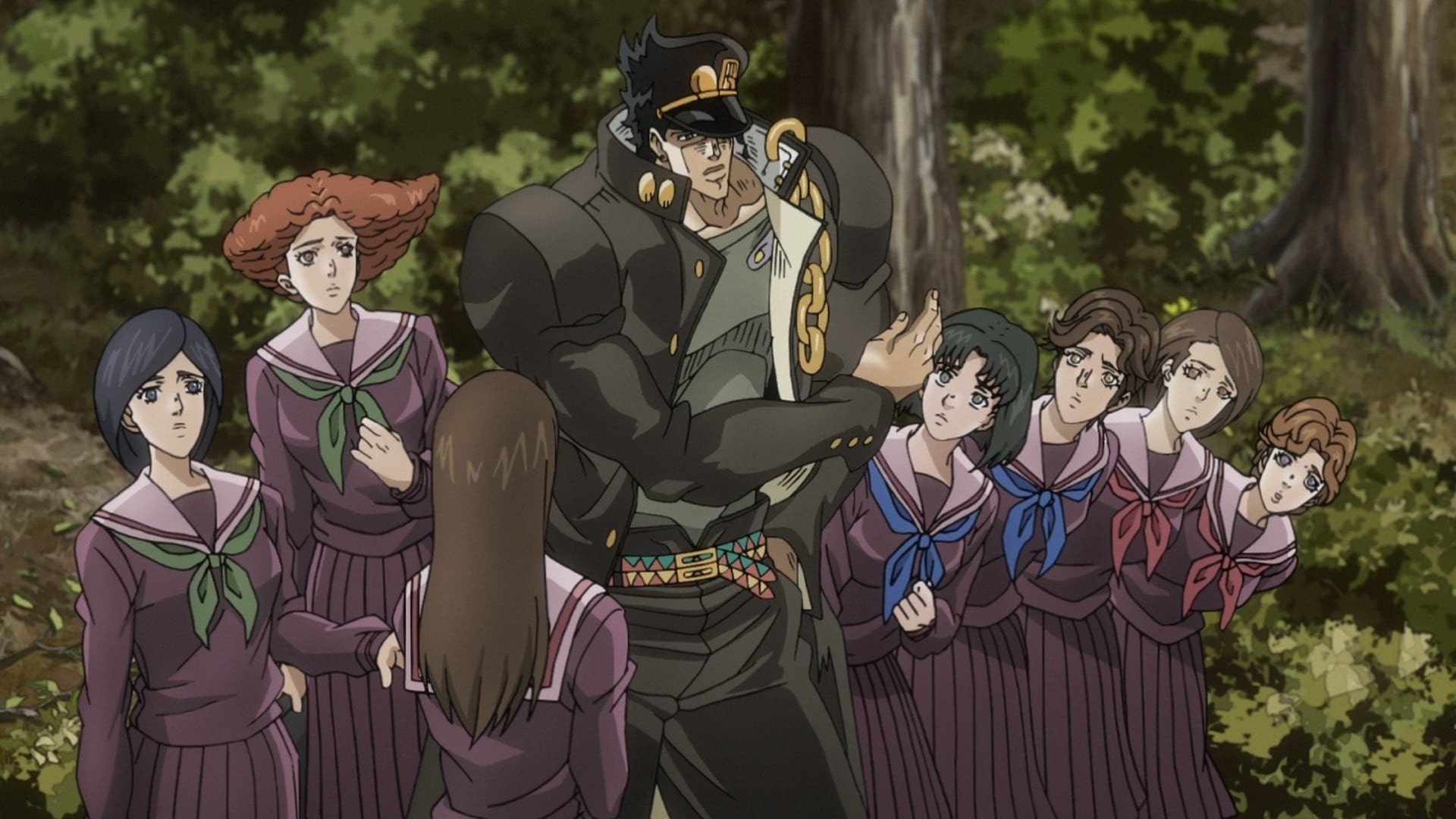 Who Will Be the Judge!?

JoJo's Bizarre Adventure Sub Indo – Jotaro heads out to school, but not after a goodbye kiss from his mother, to which he lets out an exasperated “Good grief” (やれやれだぜ Yare yare daze), and is soon mobbed by a group of female admirers. As he heads down a staircase, a mysterious student in a green uniform paints a red stroke on a painting of Jotaro. This leads to a cut suddenly appearing on Jotaro’s leg, causing him to fall down a flight of stairs, only managing to save himself by using his Stand to grab onto nearby tree branches and divert his fall. Managing to land safely, Jotaro receives a handkerchief from the student, who introduces himself as a new transfer named Noriaki Kakyoin, unaware that he is the one responsible. Later, as Jotaro heads to the nurse’s office to have his wound treated, he discovers the handkerchief he received from Kakyoin contains a death threat, stating he will kill him using his Stand. At that moment, the school nurse starts acting strangely, stabbing one of the other students with a pen before going after Jotaro with inhuman strength. Kakyoin appears and reveals he has used his personal Stand Heirophant Green to possess the nurse’s body from the inside. Jotaro uses his Stand to pull Hierophant Green out of the nurse’s body, only to be attacked by its Emerald Splash attack, whilst the nurse receives harsh internal injuries as a result of Jotaro’s extraction attempt. Despite seemingly being fatally injured by Heirophant Green’s attack, Jotaro, deciding he will be the one to judge standing against evil Stand users, shrugs off Kakyoin’s next attack and uses his Stand to pummel Heirophant Green, chanting “Ora Ora” (オラオラ) with each punch, until Kakyoin falls unconscious. After leaving the nurse to the school faculty, Jotaro brings Kakyoin back home to Joseph and Avdol. Joseph explains that Kakyoin had been forced to become Dio’s pawn and will likely die in a few days, revealing the cause to be something implanted in Kakyoin’s forehead.