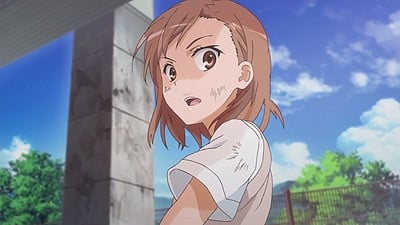 Toaru Kagaku no Railgun Sub Indo – Harumi explains she used the Level Upper as an alternative to the Tree Diagram and gives Kazari the antidote program. When she is eventually roadblocked by the Anti Skill, she uses Level Upper’s side effect; the power to use multiple abilities, to defeat them. Mikoto arrives and battles against Harumi, initially having trouble against her abilities. However, using some cunning to avoid her attacks, she is able to get up close and shock her directly. As she does, she gains Harumi’s memories of when she was a teacher for abandoned children. She grew attached to her students and became really depressed when they were all killed as part of some experiments. Harumi’s constant rejection to ask the Tree Diagram for help led her to create the Level Upper to find a way herself. Just then, Harumi falls unconscious and a strange creature emerges from her head.