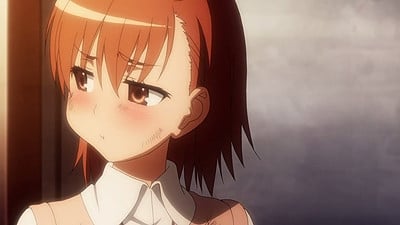 Toaru Kagaku no Railgun Sub Indo – As Mikoto fights the strange creature, who can regenerate and grow bigger, the Level Upper victims starts spasming. Mikoto and Kazari learn from Harumi that the creature, known as AIM Burst, is made from AIM diffusion fields, formed from thousands of negative thoughts. She instructs Kazari to use the program she gave her to uninstall the Level Upper. Mikoto fights against AIM Burst to prevent if from reacing a nuclear facility, whilst the remaining AntiSkill help Kazari get where she needs to go. Kazari plays the program throughout the city, calming down the victims and stopping AIM Burst’s regenerative ability letting Mikoto do some damage. She then starts hearing the thoughts of the victims and uses her railgun to destroy its core. With AIM Burst defeated, Ruiko and the other Level Upper victims regain consciousness, albeit without their enhanced powers.