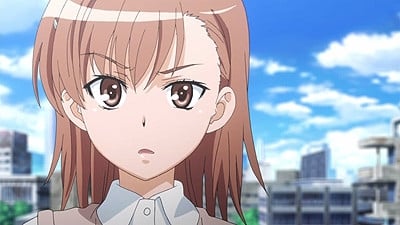 Toaru Kagaku no Railgun Sub Indo – Mitsuko finds herself attacked by Skill Out, a gang of Level 0s who use high pitched noise to cancel esper abilities. Mitsuko is saved by a man with a spider tattoo, who Konori identifies as Big Spider. Whilst investigating the slums, Mikoto and Kuroko encounter a red haired guy who beats up some thugs. As more espers are attacked by Skill Out, Mikoto and Kuroko battle some of them and reach their hideout and their gang boss, Kurozuma. They activate their Skill Out device, nullifying Mikoto and Kuroko’s abilities, but it is disable by the red haired guy. After beating the thugs and scaring them off, the red haired guy is approached by Konori, who seems to be an old acquaintance of his.