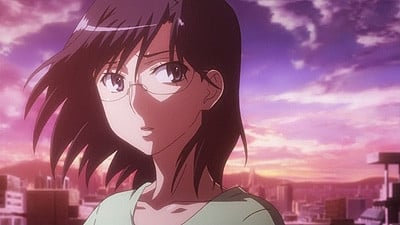 Toaru Kagaku no Railgun Sub Indo – When Konori asks Kurozuma why he hadn’t contacted her, she assumes it is because she’s a member of Judgment, and she avoids coming into the office for a few days afterward. Curious about what relationship the two had, Mikoto, Kuroko, Kazari and Ruiko visit her dorm, where they run into her roommate. She reveals that Konori was once a member of Big Spider when she was having a hard time, and despite her being an esper, she was allowed to stay. When they receive word that AntiSkill will be performing a surprise raid on the slums, Mikoto confronts Konori herself, who explains Kurozuma had left on an errand, which led to an accident where he was presumed dead. Kurozuma arrives Konori tries to convince him not to fight against Big Spider himself. The next day, Konori, Mikoto and Kuruko assist Kurozuma in facing against Hebitani. After Mikoto destroys the Capacity Down device, Kurozuma and Konori deal with the thugs. Hebitani reveals he has a bomb strapped to his body, but Kurozuma takes him down. Afterwards, Kurozuma accepts his arrest, but makes up with Konori.