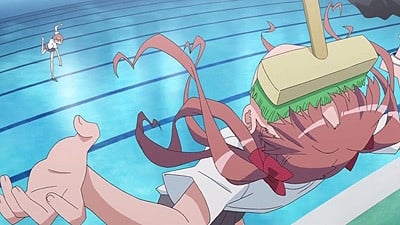 For Working Under the Blazing Sun, Proper Hydration is Required

Toaru Kagaku no Railgun Sub Indo – Mikoto encounters Tōma Kamijō (the protagonist of To Aru Majutsu no Index) and corners him but he blocks her attacks and escapes. Deciding to keep quiet about it, she invites Kazari and Ruiko over to her dorms, ruining Kuroko’s plans of celebrating her one month ‘anniversary’ of becoming Mikoto’s roommate. However, Mikoto reveals that Kuroko forcefully sneaked into her room during that time. To make matters worse, after finding out Kuroko kept one of her panties, has a collection of perverted photos of her and learning Kuroko ordered aphrodisiacs for their “anniversary”, Mikoto has a fight with Kuroko in the hallways but both stopped when the fearsome Dorm Supervisor arrives.

As punishment for using their powers inside the dorms, both of them are sent to clean the school pool. Mikoto is introduced to Kuroko’s classmates, Kinoho Wannai and Maaya Awatsuki, whom the former is an Aquakinesist that Mikoto saved from some thugs some time ago. Kuroko gets jealous of how well she gets along with others and cries believing Mikoto doesn’t care about her. To cheer her up, Mikoto gives her a present celebrating a slightly different anniversary, the day when they became friends. However, whilst toasting, Kuroko accidentally drinks the aphrodisiac meant for Mikoto. She becomes so overcome with lust that she steals Mikoto’s underwear whilst she is still wearing them, prompting Mikoto to repeatedly electrocute her as punishment.