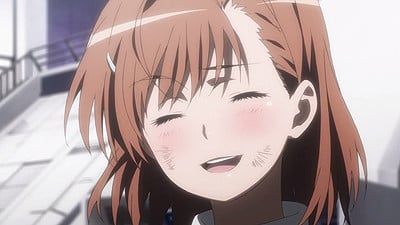 Toaru Kagaku no Railgun Sub Indo – Mikoto and the others catch up with Harumi, who was actually being led away by a decoy. As Kuroko and Mitsuko hold off Telestina’s ground troops, Harumi, Kazari and Ruiko head towards the real location of Erii and the children, whilst Mikoto defends them from Telestina, who is piloting a large robot that is resistant to Mikoto’s attacks. With the help of Kuroko, Mikoto eventually manages to beat the robot by using its weaponary against it. They manage to find the children, but are soon found by Telestina who attacks them with Capacity Down. She plans to use the first sample, taken from herself, and the children in order to turn Erii into a Level 6. Just as things seem desperate, Ruiko manages to destroy the Capacity Down controls, allowing Mikoto to use her railgun and beat Telestina. With the first sample in hand, Harumi finally finishes the cure and reawakens Banri and the other children. As they recover, they give a big message to Harumi for her birthday.