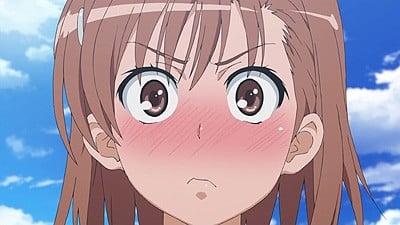 Toaru Kagaku no Railgun Sub Indo – While the girls are discussing about urban legends, Mikoto isn’t impressed about Ruiko’s story about a woman who takes of her clothes in public, but takes an interest in a story about an ability that can cancels out other abilities. The story reminds her of her first meeting Tōma, when he tried to saved her from a group of thugs who were harassing her. At first she was impressed as he was the only one who tried to help, but she quickly got angry when he unintentionally insulted her and shocked everyone around her. To her surprise, her powers was ineffective against Tōma. Just as she was done thinking about it, Mikoto encounters Tōma giving directions to a woman. The woman randomly starts to take off her shirt in public because it’s hot and Tōma is mistakenly labelled a pervert by the crowd, forcing him to run away whilst Mikoto is left to deal with her.

As Mikoto and the woman are resting at an outdoor cafe, Mikoto realizes the later is the infamous ‘Undressing Woman’ that Saten talk about. She later introduces herself to Mikoto as a researcher on Cerebral physiology and AIM (An Involuntary Movement), which Mikoto asks questions concerning about Tōma powers but the former has never heard an ability that can cancels out other abilities before. Meanwhile, after learning Mikoto met the ‘Undressing Woman’, the girls decide to rile up Kuroko by telling her about a curse that happens to girls who meet her. As Mikoto cleans the researcher skirt that was stained by ice cream inside the bathroom, she asks Mikoto to thank Tōma for helping her and concludes Mikoto might have feelings for Tōma from the way she talks about him, even labeling her as a tsundere. After she helps the researcher find her car, Mikoto encounters Tōma yet again and challenges him to a fight for leaving her with the researcher.

As they battle near an embankment, Mikoto launches a direct electric shock which he manages to stop. She then creates a Chainsword by electro magnetizing the Iron sand on the ground and starts charging him and whips it but he manages to push it back and turn it back into iron sand. Mikoto sends a large cloud of Iron sand against Tōma, using it as a diversion to finally get close to attack him and grab his right hand. Just when she thinks she’s won and tries to shock him, she is surprised when her powers don’t work (as unknown to her, Tōma’s right hand is the source of his power). Mikoto cowers thinking he’s going to hit her, but instead, Tōma decides to pretend he got shocked and falls to end the match. Unfortunately, Mikoto sees thru the ruse and angrily attacks him to force him to fight seriously and chases after him all night. As a tired Mikoto returns to her room, Kuroko, believing Mikoto’s under the ‘Undressing woman’ curse tries to ‘cure’ her but gets tied up instead. At the sametime, the researcher learns who Mikoto is.