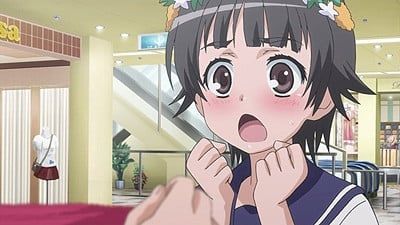 Toaru Kagaku no Railgun Sub Indo – With incidents involving graviton bombs becoming more frequent and bigger in scale, Judgment are asked to cooperate with Anti-Skill to investigate the matter. However, they are still unable to find any leads, given the minimum psychic level needed to pull off such a feat. Talking with Mikoto, Ruiko laments her lack of powers, thinking she wouldn’t be helpful. She also mentions to Mikoto about a rumor concerning the Level Upper, which supposedly increases a psychic’s power. The next day, whilst Kuroko continues to try and find a connection between the graviton incidents, Mikoto, Ruiko and Kazari go shopping at the mall. Whilst looking at a pair of pyjamas, Mikoto runs into Tōma, who is accompanying the little girl she met the other day. Meanwhile, Kuroko discovers that the graviton attacks are targeting Judgment members, and when she detects the vibration of graviton particles in the mall, she soon realises that Kazari is the next target. As civilians are evacuated from the mall, Tōma informs Mikoto that he had lost track of the little girl. They re-enter the mall to find her giving a stuffed doll containing a graviton bomb to Kazari. As it goes off, Mikoto tries to shoot it with her railgun, but fumbles her coin, leaving the explosion to take place. However, nobody gets hurt, and Mikoto finds and beats the culprit, a bullied boy who had become hateful of Judgment’s late arrivals. Whilst everyone believes Mikoto saved everyone, it was actually thanks to Tōma’s Imagine Breaker that everyone survived.