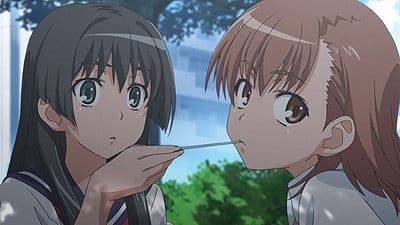 Toaru Kagaku no Railgun Sub Indo – Kazari gets a cold and cannot go to school, but Ruiko, Mikoto and Kuroko pay her a visit. Kuroko is curious how Hatsuya, a level 2 esper, had powers equivalent to a level 4’s. Mikoto brings up the Level Upper urban legend Ruiko had mentioned, and Kuroko points out this is not the first time a user’s power and the user’s level have been vastly different. Kazari finds out via an Internet forum that a restaurant in town is where information on the Level Upper may be found. Mikoto and Kuroko go to investigate, and Mikoto acts like a cute, interested girl to get a few guys to tell her about the Level Upper. Mikoto eventually gives up the act and after taking care of the guys and their friends, their leader arrives, though Mikoto gets away unscathed, though in the process causes a city-wide blackout. The next day, Kuroko and Mikoto discover that Hatsuya, along with several others who have shown abnormally strong powers, have all fallen victim to lapsing into comas. Meanwhile, Ruiko discovers the Level Upper by chance.